Quixel and Epic have provided us with some excellent high quality assets with their Megascans collection.

They have very high detail and high resolution textures. This is great because we get to choose the level of detail we can have in our games. The more optimized each asset is, the more of them we can have in-game.

This tutorial shows you how easy it is to get a huge reduction of resource space, both disk and GPU by using rdTexTools to optimize the textures.

In fact with almost all the Megascan plant materials, it’s possible to get the same reduction as here – down to 30% of the GPU resources and down to around 30% of disk resources for each material with almost imperceptible differences in quality! That’s 30% of the 2Mb Materials, it’s even more than that for the 4K and 8K Materials.

This tutorial uses the Megascans Hydrangea asset with 4K textures, the same savings come if you use 2K or 8K.

The goal is to get the texture sets down to around 5Mb for each asset.

This is a good size for having a large amount of varied assets on the highest end graphics hardware out in 2021/2022. Most cards have about 8Gb GPU memory – the higher end ones can have up to 24Gb (GTX3090ti).

This is the maximum size of course, for older hardware there are the scalability options to lower textures sizes and other performance tweaks.

Each game/project differs so you’ll need to consider your projects attributes to find the best sizes.

Using the scalability, I find having the texture sets at around 800Kb to 1Mb on older hardware (e.g. GTX1080ti which has 11Gb but slower bandwidth) gets a good number of objects on screen without draining too many resources.

If the asset is a feature in game rather than background scenery it can be higher resolution as the players attention will be focused on it more.

For the tutorial we are just using the textures and meshes, imported straight into UE and creating simple materials. The tutorial can’t really show Quixels proprietary shader code. The snippets shown can be added to their Blueprints though.

For most applications it can be a lot easier to use the Quixel Bridge plugin to directly import the meshes and full materials. The meshes have all the LODs installed and the materials include a lot of powerful adjustments. Quixel and Epic have just recently released a powerful shader system to add season and health to foliage – well worth checking out.

A note about the meshes and static lighting builds – sometimes you will need to increase the default “Min Lightmap Resolution” from 64 to 128 (512 for the Hydrangea) when importing foliage meshes – whether using the Bridge Plugin or directly importing. If not, a lightmap UV map cannot be built and strange things will happen when building the lighting.

The textures for this plant are:

As described in the rdTexTools manual – we only loose a small amount of detail by converting the materials Roughness and Opacity to use BC1 compression so both these textures can be combined into one RGB texture using BC1 compression:

This removes the Opacity and Roughness Textures from the Material and adds the OR (Opacity+Roughness) texture:

You also need to edit the materials blueprint to use the new combined channel texture:

Now we set up the material

This is a simple Material to illustrate the changes, it can be applied to the Megascans materials too.

How much difference to the rendering does this make?

Taking a snapshot of the scene before making the changes and after (exact same position/rotation, no bloom, no Auto-Exposure and FSAA) and running them through the rdTexTools DiffMap tool we can see the difference:

There is a small difference, the Hue has only changed 0.61% which is good and the rest is only just noticeable in the difference map.

If we have a good look at the transparency map (the colors that show through foliage behind the light source) we can find ways to optimize that too.

This shows that there is a very minimal amount of Hue change going on (0.12%) and the maps only differ in lightness

This means it’s a great candidate for a 1 channel difference map instead of the 3 channel RGB map.

There is a little loss in the sub-surface color, in the original the light-green is more vibrant than with the 1 channel map but this can be adjusted by changing the SSS Color Intensity and SSS Color Tint options in the Megascans material instance.

Now we create a 1 channel difference map of the Hydrangea Translucency map.

Now we have a single channel greyscale texture of the differences between the two maps.

Now we have inserted that data into our packed channel texture – no extra memory is added to the GPU mem, and the original Translucency map can be removed freeing up more memory.

The last step for this bit is to change our already modified master material to use that channel and do the difference calculation on it.

So now we have removed 3 textures and added one, the running total is now: 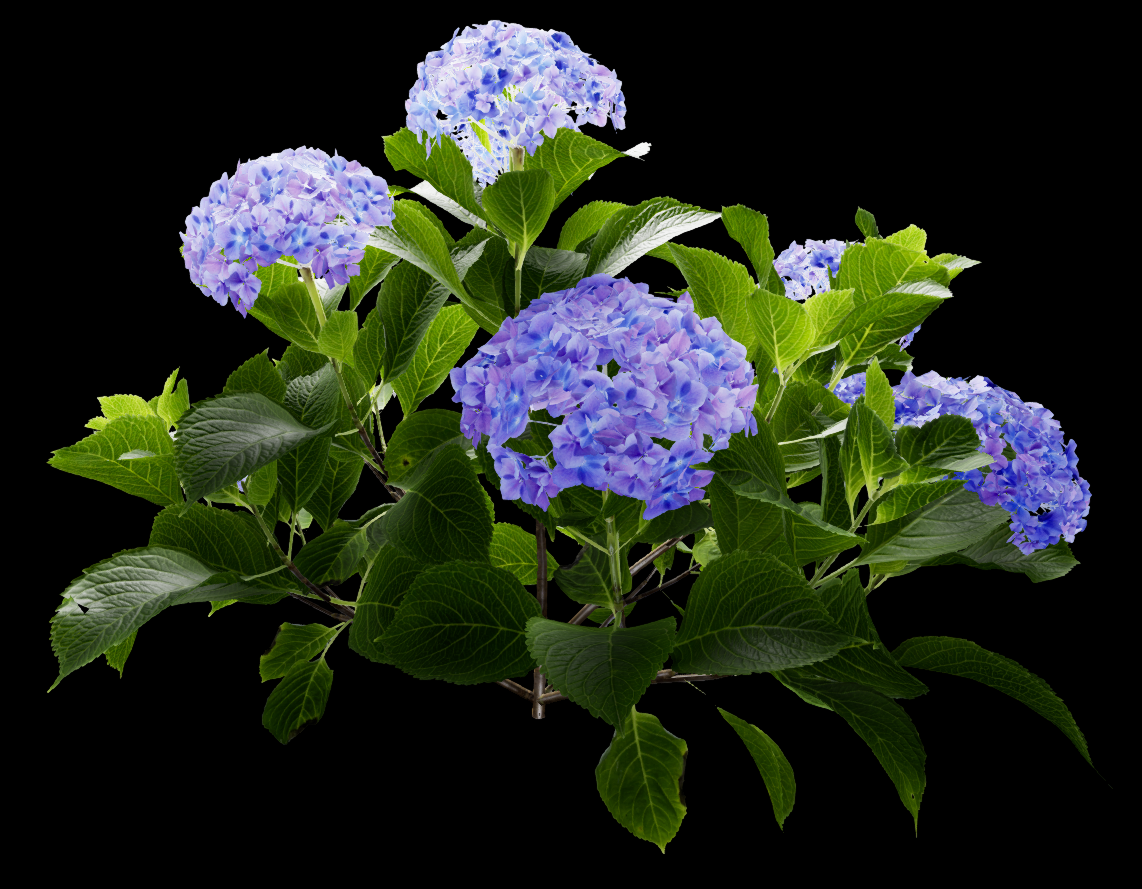 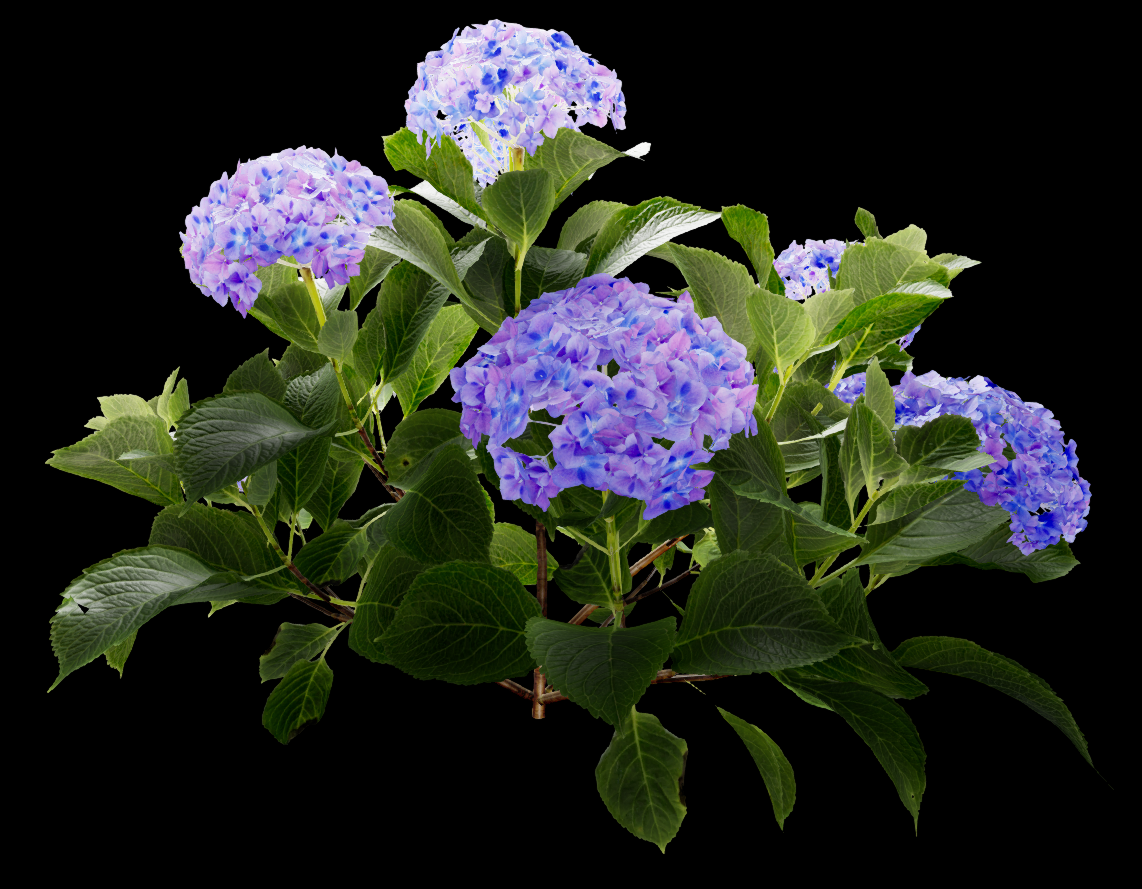 So what else can be done to optimize this material?

It turns out that some of the textures can be sized down by quite a bit without loosing any visual detail. This can be done by either setting a “LOD Bias” or by re-sizing the texture with rdTexTools, when possible it’s best to use the LOD Bias as it retains the original higher res data where re-sizing it looses it.

The last texture left is the Diffuse – as the normal, roughness etc change the diffuse so much, it’s possible to reduce the size of the diffuse map too without loosing much – setting the LOD Bias to 2 (1024×1024) gives good results while reducing the memory from 10.67Mb to 0.67Mb – savings of 93.72%

We could have done the same with the 2K ones (just doesn’t give the option to go higher if you want later), the original would have been 15.33Mb and optimized the same at 4.64Mb giving a size 30% of the original.

Of course, not all the optimizations have to be made – just the ones that fit your materials and your scenes – you will still save a lot of memory and disk space.

When optimizing Foliage, and any type of texture that has very thin parts using masks – you may find that when viewed from a distance, it appears to fade out and disappear – it happens on things like grass (e.g. BasketPlant).

The reason it does this is because the Opacity Mask gets interpolated in lower Mip-Maps, and looses the “solid” parts.

You can get it back up and running nicely at a distance by changing the “Mip Gen Settings” of the Opacity Map (or in the case of this tutorial, the OR Map (Opacity + Roughness)) to “Unfiltered”.